On Wednesday I had planned a trip to the Hardy monument as it is not open earlier in the week. Open means a cafe and the chance to go to the top. Otherwise it stands there out in the open.

Recent experience in walking in the countryside to well known locations or popular routes led me to believe that the off-road walking route would be well signposted. I did however have an ordinance survey map (borrowed from the library – Yay!) and a Silva compass (lent by James because I had forgotten to think of bringing my own) as backup.

When we got off the bus the road route was signposted – 2 miles and there was a sign to the right as we walked through the village of Portesham pointing to a walking route. That was the last we saw of specific signs however.

Faced with a choice of two paths I was glad I had both map and compass. However life is tough if you are thirteen and Louisa informed me that she couldn’t stand still while I worked out the right direction as her legs would seize up and then plowed ahead on the lower path which had been my first choice.

Suffice it to say that it was the wrong path and from then on I muddled along, trying to follow the map while walking, jollying Louisa along as it was very hot (hotter than I had expected), reversing direction when it was obvious we had made the wrong choice, rejoicing when we caught a glimpse of the monument, so in the end the expected two miles was nearer three and the hour I estimated it would take became ninety minutes. 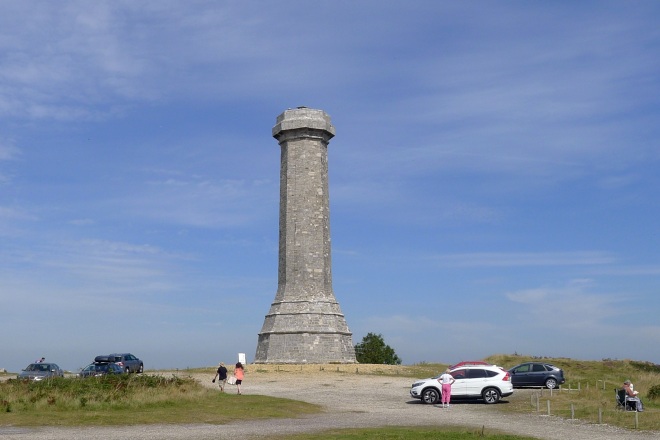 was an ice cream for Louisa and some coffee for me. The cafe was a sort of caravan style similar to an ice cream van with a window at the side

I wish I had taken a photograph here but I was too intent on reviving myself.

I was offered not a mug but a cafetiere of coffee, served on a tray with a cup and saucer and jug of milk. The cafetiere had a crochet cosy in bright colours that had been made by the lady serving the coffee. (We discussed the making of cosies when I gave back the tray.) There were two chairs and a table beside the ‘cafe’ and I sat there and drank my coffee.

Then Louisa and I found a picnic table and ate our lunch (again no photograph) after which we went and sat in the shade of the monument and Louisa picked up her crochet again. I got up after a while and took some views.

Better views were to be had from the top however.

The cost of climbing the one hundred and twenty steps to the top of the monument was very reasonable so Louisa and I, when we felt sufficiently revived, opted to go up.

I was pleased to find that Louisa after her earlier moaning was now very happy that we had come and enjoyed the view.

Here is a view over towards the Chesil bank which seemed to follow us wherever we went.

And further round the road that wound further inland. 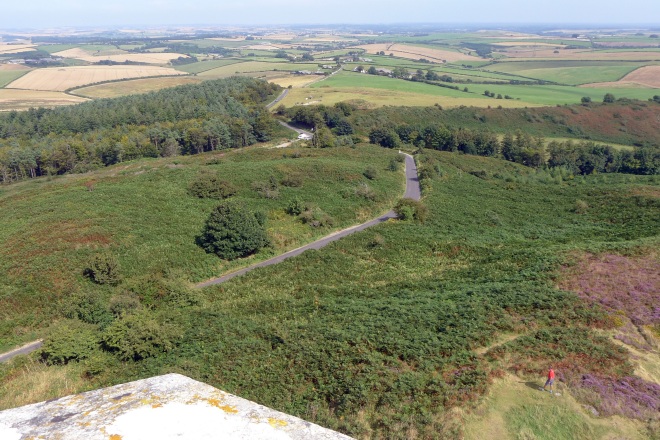 We opted to be safe rather than sorry for the return trip and followed the road back towards Portesham:

very much a country route but no footpath so frequent recourse to climbing the verge.

I had been expecting to meet up with a blogging friend on Thursday but personal circumstance meant that that was not possible so a re-think was necessary.

The weather forecast suggested rain so a return trip to Abbotsbury to visit St Catherine’s Chapel seemed a good option. And as it turned out we were glad of the shelter the chapel offered.

Louisa was charmed by the large number of doves and pigeons inside the chapel. You can see two either side of the window both on nests. One seemed to have chicks and the other was obviously incubating hers.

I took a photograph of the roof from inside 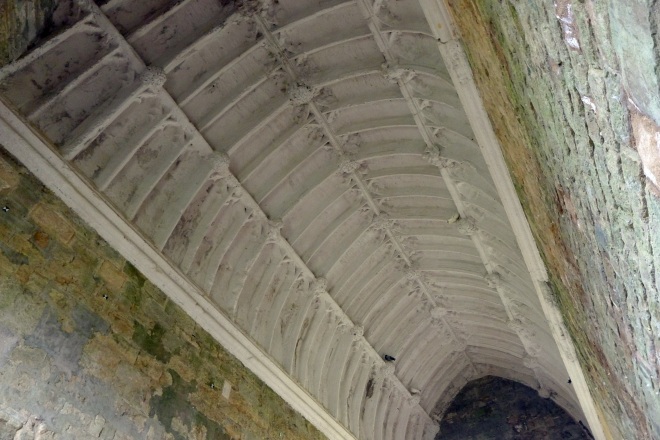 and then later of the turrets on the roof outside. 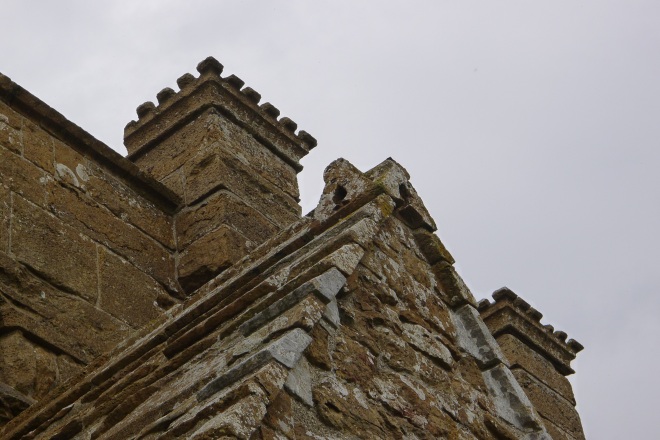 And some views of the surrounding coutryside from the front of the chapel.

Here is one of the road snaking up the hill.

And here is the village of Abbotsbury. 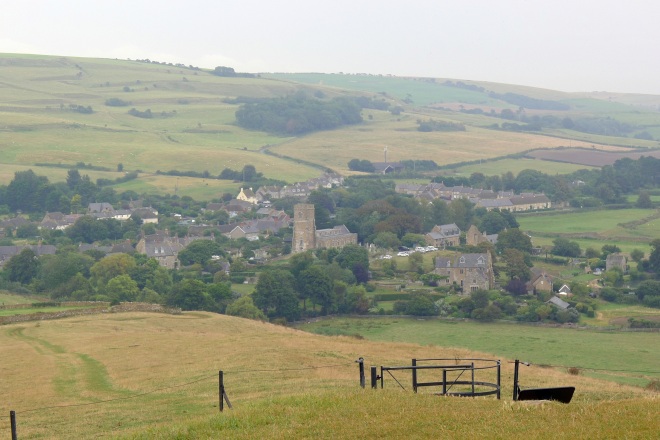 You can see it was a misty moisty day!

I am loving Dorset, it is all very pretty.

Friday being the last day, a gentler pace seemed appropriate and so the main events were an afternoon boat trip and a meal out in the evening.

the side where our appartment was, just one street behind.

Here is the Nothe Fort at the end of the harbour.

We then travelled along the Jurassic coast. I took a few photographs, as much as one can in a rocking boat, but although they are interesting as a record not many are worth showing.

and here near the half way point where the dipping jurassic gives way to the creataceous.

Saturday we were picked up and I had expected a quick trip home and a collapse but my daughter had decided to come too and we were offered the chance to go wherever we wished.

Having missed out on the Cerne Giant we made for the viewing point and took some photographs.

Here is the best I could do of the giant himself. 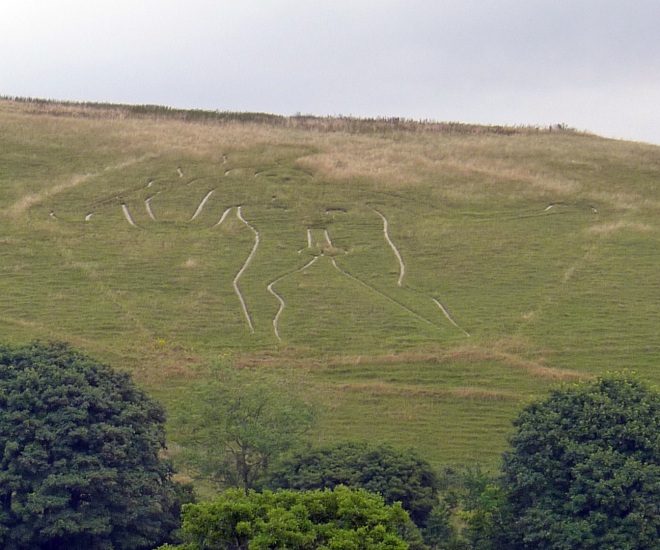 I was a little disappointed that he did not stand out more clearly.

Here we are myself, daughter and grandaughter with the giant in the background.

The weather looked a bit threatening but we decided we would go and take a look at Maiden Castle. We were still dithering as to whether to get out of the car and walk round the ramparts when the heavens opened and the thunder and lightening put paid to any such idea.

So we spent the rest of the day at the Dorset County museum and very interesting it was too.

Before I end I thought I would share our crochet with you. Yes I did do some crochet though not while out as I was trying to design a scarf pattern.

I had some yarn I had won in a giveaway.

And I decided to use the little extra ball to experiment to see if it was enough for a scarf.

I was thinking pineapple bookmark,

as inspiration and I even found a picture of a scarf on the internet that seemed to combine these ideas and so, with much undoing and redoing I produced this.

Louisa on the other hand worked away doggedly at her scarf. I started her off with a couple of rows and then she did the rest. 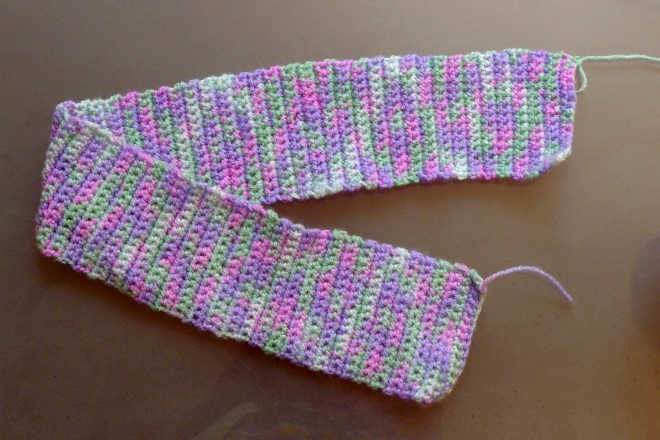 Almost two feet and I was pleased to see that her confidence has grown to the point where if she found she had the wrong number of stitches at the end of a row she would undo and redo till it was correct. 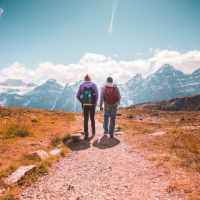 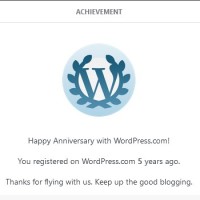